Ever heard the phrase, “Work hard, play harder?” I used to LOVE this saying. Now, I have second thoughts. I mean, WHY does everything have to be so hard? (“That’s what she said.” … sorry, couldn’t help myself!)

Here’s the thing: that phrase denotes that you have to put in MAJOR EFFORT to work and play. It kinda defeats the purpose of playing, don’t you think? I know it’s suppose to mean have MORE fun at play as your reward for working hard. But the phrase itself, “Work hard, play harder” just doesn’t sound like a good time. It makes the act of playing sound like an even greater chore, with greater hardship.

For me, words are powerful. Words inspire and alter your senses, your thoughts. Words create mood, energy and beliefs that affect your mind, body AND emotions. Words affect you!

Look up the synonyms for “Hard” and “Hardy.”

Hard has mostly negative connotations such as callous, merciless, difficult, and soulless.

Hardy, however, relates to positive words such as strong, mighty, powerful, and healthy.

I encourage you to use my WenEver phrase: “Work Hardy, Play Hardier.”

That’s exactly what I did after I wrapped Season 5 of Marvel’s Agents of SHIELD. Wow! Believe me, I was CHALLENGED! I had torn my ACL/Meniscus near the end of Season 4 in March 2017. After finishing S4, I had knee surgery in May. The show was picked up, and so I was back at work by July. When you’re under contract on a television show, you gotta be there! “The show must go on!”

With a repaired ACL, my left leg was wrapped in a full-length knee brace and I had to use crutches. I certainly did not feel very badass. In fact, I felt more like a fat ass! I’d gained a few pounds because I couldn’t be my normal active self while we were on break.

How was I going to play the super kickass Agent May? Well, thanks to my clever writers and producers, they gave May an injury in the very first episode! GENIUS! She gets impaled by a steel pipe, right through her left leg. At first, I thought how smart the writers were to give Agent May a reason to avoid fighting in Season 5. But NOOOO!! Of course, she still has to be a badass!

“What happens after she discovers a pipe through her leg,” you ask? Well, for one thing, she doesn’t profusely bleed to death. Instead, May simply yanks that pipe out of her leg and uses it as a weapon against her opponent. OF COURSE SHE DOES!! Hey, she is a highly trained Agent of SHIELD. 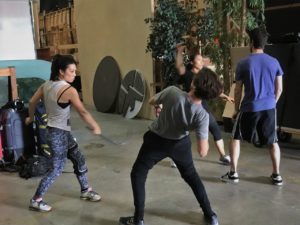 Ming-Na Wen rehearsing the pivotal scene in Agents of SHIELD Season 5 Episode 1 where Agent May gets impaled by a steel pipe.

And being the crazy lady that I am, I actually DID a great deal of that fight scene with my newly implanted ACL and big knee brace – a mere 2 months after surgery. I couldn’t look like a wuss, right? What I couldn’t do, my stunt double took care of for me. I was crazy but not THAT crazy. After all, we had 22 episodes to shoot, and we had to make sure that I made it to the end without re-injuring my knee. It’s a very wise decision to be extra cautious.

And thus began my long road to recovery and facing the toughest challenge in my career. I was going to a physical therapist three times a week, fitting it around my busy shooting schedule for the show. The most difficult part was feeling that I couldn’t do my best because I was limited. It was very frustrating. I would tire easily and endurance was a constant issue. I just didn’t feel like my usual happy self.

Instead of socializing with others, I often had to isolate myself on set so that I could rest between takes, taking naps during lunchtime. This was all very different from my normal routine, but it was all very necessary. My whole objective was to be able to keep up with the grueling shooting schedule of an action-packed show like Marvel’s Agents of SHIELD and to heal as fast as I could. With lots of support at home and at work, and giving myself many pep talks, I just stayed focused on doing the very best I could under the circumstances. Time definitely helped as my knee grew stronger every month. I was very surprised at how long recovery from a ruptured ACL could take! I mean, it’s just such a small part of the anatomy!

So when I finally wrapped on April 13th, 2018, I was SO READY for my hiatus!! I had definitely worked hardy. Now, it was time to PLAY HARDIER!

After a few days of enjoying downtime, I took off for NYC with my daughter Michaela. We were truly looking forward to this trip together. The main reason was for her to attend her college orientation. We were also going to fit in as much as we could in just four days. What an insane idea that my little girl is going off to college! I am so proud and excited for her.

First, I did a PBS press event to launch the project called “The Great American Read.” Yes, I did some work. Don’t judge! It was a half day gig and happened to just time out right. Besides, I got to meet Diane Lane, who’s work I’ve admired for a long time. She also told me that my interview segment made her cry. AHHH! Life’s little wonderful moments. 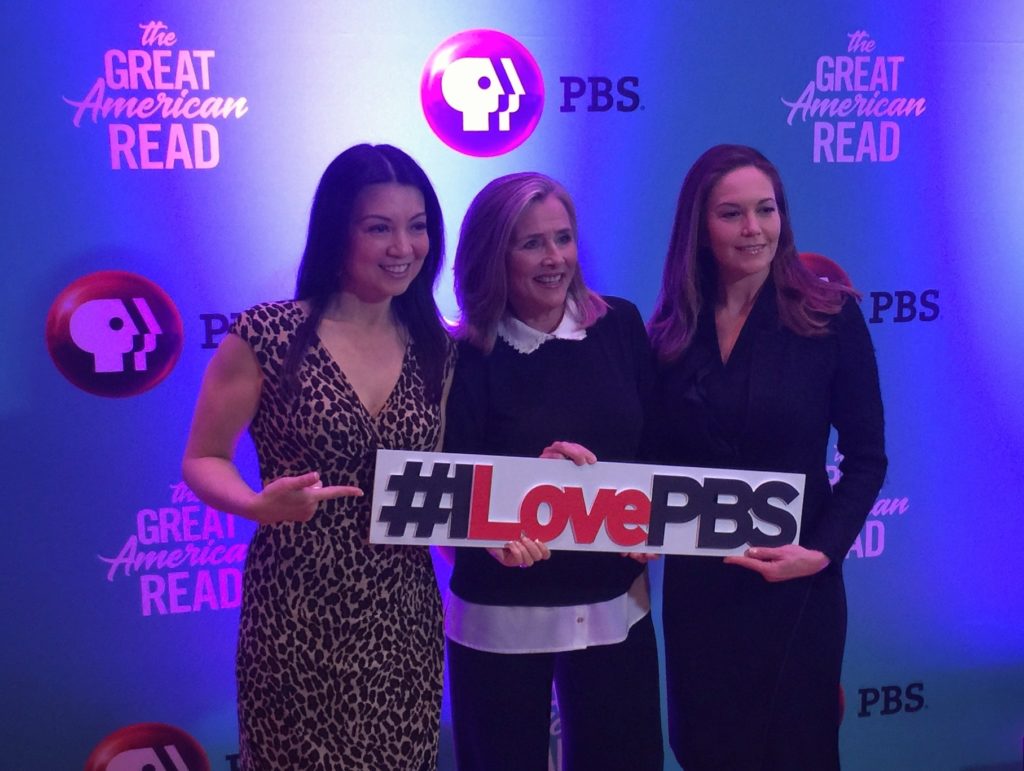 Afterwards, we visited the Morgan Museum, went to Central Park, and saw three — yes, THREE — incredible Broadway musicals. We even got to go backstage and meet with all the superbly talented actors. (Love you, Mady!) We reunited with my family and friends and, of course, went to Michaela’s college orientation. WHEW!!! We had such a great time!!! That’s how one plays! Make every day count! 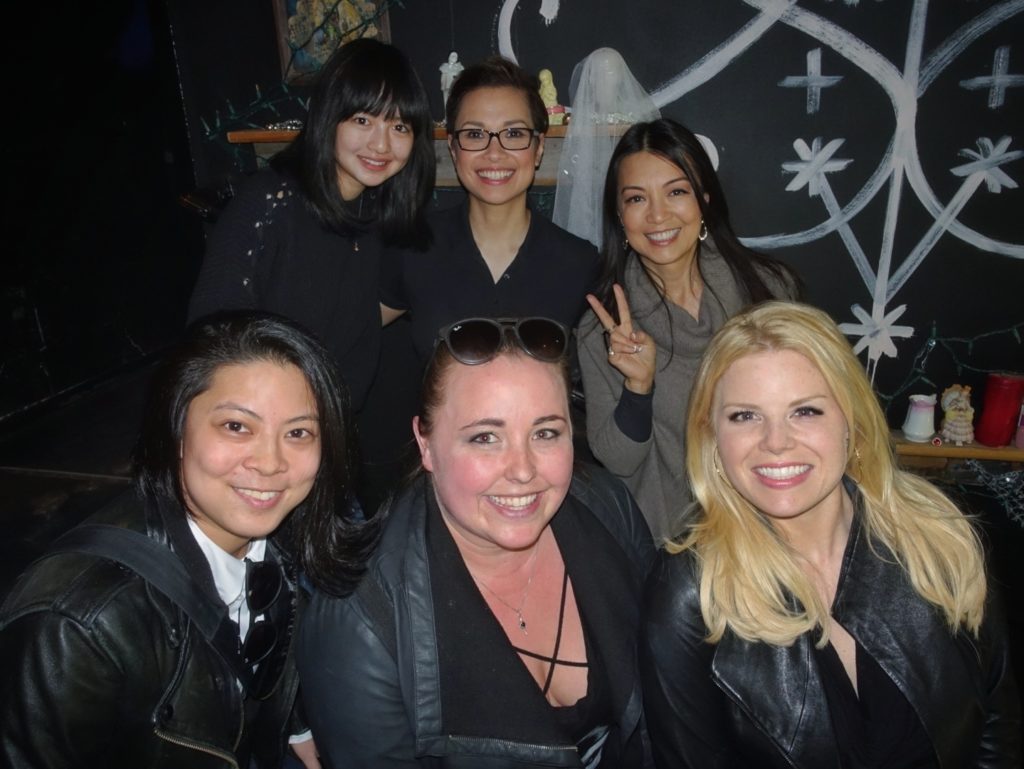 Michaela, Lea Salonga, Ming-Na Wen, Mady, Mauli, and Megan Hilty backstage at “Once on This Island.”